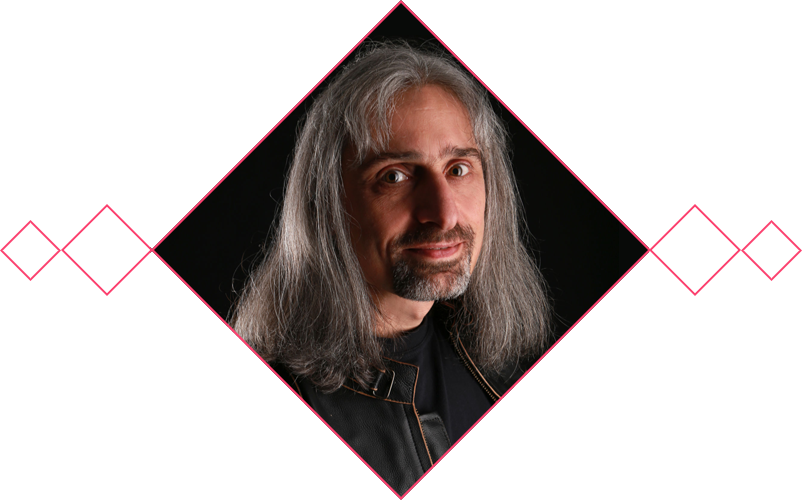 I was born as Gerhard Johann Friedrich Tentler on November 5, 1966 in Bonn (Germany). I was the second of three children. Our mother was Italian and came to Germany in the beginning of the 60s. There she met my father, who has worked in several professions through the years. At the beginning of the 70s my parents rent a pub for a few months, but it turned out to be the final shot to their marriage, which had lasted for about ten years. I had just been put to school then.

When I was a kid I was (like probably most kids) addicted to two-wheeled-vehicles: First I had a scooter, later a bicycle, and when I was a teenager I rode small motorcycles up to 80 cc. But there's one exception: When I was five my very first vehicle was a so-called "Kettcar". This was a go-kart for kids, driven by pedals.

After my school-days, which I spent in five different schools (we moved alot then), I went to a business college for two years and then made a vocational training as an office clerk for another two years. During this time I found my passion for computers and programming - besides playing guitar, it was my hobby number two. By the way, my first computer was a Sinclair ZX Spectrum with 16 KB RAM, 3.5 MHz 8-bit-CPU and 8 colors. Before I knew of computers, I also wrote some shorter and longer novels. None of them remained, though, unfortunately (or thank God).

Since I was a little kid, I've always been interested in ships and seafaring. So it doesn't surprise that in January 1986 after my vocational training I went to the navy for four years. After my training as weapons- and radar-operator, which lasted almost one year, I served in the 7th fast patrol-boat squadron in Kiel as petty officer second class on "S 80 Hyena" for two years and on tender "Elbe" (the auxiliary vessel of the squadron) for one year and two months.

In my free time I started to do home recording. Step by step I bought better equipment, in order to make more "professional" recordings. Many instrumental songs remained from this time, and I did put them online now under the name of "AmadorA" (call me sentimental...).

Because my interest into Asia grew at this time - which also was influenced by my Japanese penpal - I started to learn Japanese with cassette tapes, sold or gave away all my stuff and went to Tokyo in October 1990. After some difficulties at the start I married my penpal about half a year later and started to teach German for a living. Four years later we divorced, though. We had just been too young for marriage I guess, and the cultural difference is pretty big. Four out of five German-Japanese couples whom I knew divorced during that time.

My favorite vehicle in Japan was once again the motorcycle, although I also had a driver's license for cars. I had five different motorbikes, from 125 to 1200 cc. But I also have to say that as a car driver in Tokyo you're more standing than driving, and a biker has of course much better cards, also regarding the parking possibilities.

Despite the fact that I never was a scilled sportsman, I took the chance in Japan and did Kung-Fu for about two years. Still, I had the brown belt when I dropped this hobby in favor of another one: I started to play in rock bands, and I was the bassman in a band called "Runswell Mary" for over three years.

After more than six years in a foreign country, I was 30 years already, my decision was to return to Germany in the beginning of 1997. That also meant to sell all my stuff and start all over again. But I was lucky this time, too. First I got a job as a computer teacher for about three years, and in February 2000 I finally found my current profession: software developer. So I could earn money now with a hobby that I had cultivated for so many years.

In Germany I continued my "musical career". For four years I've been the guitarist of the rock band "Taranis". After the band broke up end of 2001, I retired from the stage for two years, but end of 2003 I returned as the bass player of a rock band called "Fingers". However, this band also broke up in January 2005. In November 2006 I grabbed my guitar again for yet another rock band called "Velvet Saw", where I stayed for almost 14 years. During this time the singers and drummers changed a lot (two of them even died), so unfortunately we weren't able to create as many songs and albums or do as many gigs as we could have done with a steady crew, but we had a great time together and a lot of fun!

A MATTER OF TRANSPORTATION

I also bought a motorbike again in March 2001, a brandnew Moto Guzzi California Jackal - the most expensive motorbike I ever owned. Unfortunately only three months later I had a severe accident, which not only crashed my bike, but also left me with three surgeries and thus took away all my fun in biking.

When I first chartered a motorboat in May 2002 on the Irish Shannon together with my girlfriend, my naval interest was awake again. Since then we liked to spend our holidays on the water. From July 2005 to April 2011 we even had our own boat, a 32-feet-steelboat from the early 70s called "Sunflower", which however was sold again because it always had been more work than fun.

10 years after my severe accident, in May 2011 I finally bought a motorbike again. This time it had to be a Harley-Davidson - a beautiful XLH 883 Custom. It was really fun to ride this bike, to hear and feel the Harley rumble! I had to sell it again in May 2020 though, because of our upcoming emigration to Tenerife.

In 2016 I made the acquaintance of a new colleague who lives on Tenerife, and my girlfriend and I were eager to get to know this island which is the largest and probably most diverse of the Canaries. During our first visit in November 2016 I celebrated my 50th birthday there, and we fell in love with this beautiful place. From then we returned frequently to Tenerife, and in December 2018 we bought an apartment at the north-west coast. Finally in August 2020 we married and moved into our new home.

There I also bought a brandnew motorcycle in September 2020, this time a pretty sporty Kawasaki Ninja 400. The curvy streets of Tenerife with their astonishing views, combined with the mild climate there are heaven for any motorcyclist!